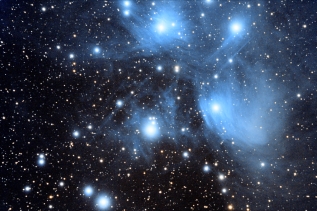 The M45 Pleiades Clusteris thought to contain around 500 stars spread across a sphere 14 light-years wide at a distance of 400 light-years. The cluster was called the “Seven Sisters” in mythology, and at least seven of the stars can be seen with the naked eye. At this time of year it well placed overhead for observing or imaging. I took advantage a very clear evening on Feb.11th to capture this image from Roberts Creek with a 120mm refractor and a modified DSLR. Combined exposure time was 120 mins.  Mike 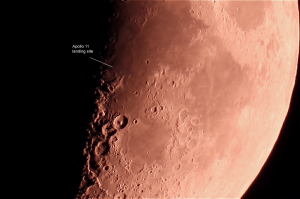 Our past president, Mike Bradley, got this picture of Theophilus crater during the waxing Crescent Moon (30%) from Roberts Creek, 23rd May, 2015 (Megrez 120mm, DSLR, stack of 100 images, Registax 6.0). Theophilus crater was named after the Greek astronomer who was the Bishop of Alexandria from 385 AD. This is a large crater at the edge of Mare Nectaris, 100km diameter. The terminator line was close by at the time, running along the Rupes Altai creating interesting vistas. The crater is located about 400 km south of the Apollo 11 landing site. Mike wanted to share this as our upcoming speaker on 12 June is Ted Stroman, who will be talking about Lunar Geography.

Jupiter and its 4 largest moons

In the month of May we will have a full moon on the 3rd and a new moon on Victoria Day, the 18th. The η Aquarid meteor shower will peak in the early morning hours of the 6th. Mercury is in a good position for viewing in the evening twilight in the West from the 1st – 21st. Venus will be very bright in the western sky after sunset. Jupiter appears in the western evening sky and moves eastward in the constellation Cancer, setting after midnight. Saturn is visible most of the night throughout the month, moving from Scorpius into Libra on the 12th. On the 20th Jupiter’s moon Ganymede will eclipse its moon Europa at 9:33 PM. On the 21st the crescent Moon, Venus, and Jupiter will be within 8 degrees of one another. Saturn will be at opposition on the 23rd, with its rings tilted 24 degrees toward Earth. Uranus will be low in the eastern sky in Pisces, but hard to see in the twilight glow in the first half of the month. The Moon occults Uranus on the 15th.

Check out Bruce’s “Sky This Month” PPT from our meeting on April 10th here: 150410 Sky this Month