The Sunshine Coast Astronomy Club was formed on July 30, 2004 when a group of 16 enthusiasts met in Sandy Hook, a neighbourhood of Sechelt, on the Sunshine Coast in British Columbia, Canada. In 2007 president Bill Clark spearheaded the drive to take us into the RASC.

article about our first Astronomy in the Park in The Local

In April 2008 we became the Sunshine Coast Centre of The Royal Astronomical Society of Canada, the 29th centre of this prestigious national organization which was founded in 1868. 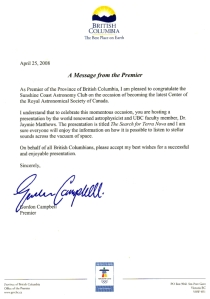 In 2013 we started construction of an observatory at the Sechelt Airport which opened on 27 June 2015: Check out our observatory on Our Observatory page  and photos on the Photo Albums page. The Premier of BC sent us this congratulatory note: Sunshine Coast Centre’s new astronomical observatory 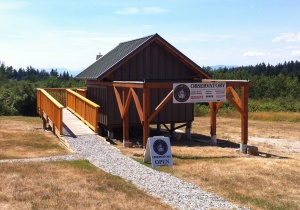 dignitaries checking out the telescope once the roof was rolled back

In June 2014 we celebrated our tenth anniversary at the General Assembly of the Royal Astronomical Society in Victoria, BC. 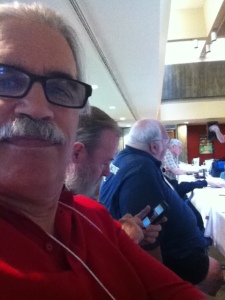 Charles, Mike, and Bill at the RASC Board Meeting at the Victoria GA

Our Centre currently has 68 members.

The members of the Board of Directors for 2013-14, as elected at the 2013 AGM (and reflecting changes made to date), are as follows: