Ottawa Centre member ROLF MEIER passed away June 26 after a battle with cancer for several months. Rolf was born in Ottawa in 1953 and received his Bachelor of Engineering degree in Electronics from Carleton University in 1977. A skillful telescope maker and a frequent user of the Ottawa Centre’s Indian River Observatory, he was nominated for the Chant medal. He was known for his excellent astrophotos. On April 26, 1978, Rolf made headlines with the first telescopic discovery of a comet from a Canadian location. He discovered further cornets in 1979, 1980, and 1984, and his record was only surpassed in 1989 by David Levy.

Rolf was Chairman of the Ottawa Centre’s Observers’ Group, Editor of Astronotes for 12 years, National Council Rep and Ottawa Centre President. His 25 cm Newtonian reflector was installed at the Indian River Observatory in 1983 for use of members. A number of articles, displaying his wide-ranging interests, have included “Identifying a Meteorite”, “Recent Aurora Activity”, and “Solid State Photometer.”

Rolf is survived by his wife Linda, and son Matthew.

To love the night sky.

I love the night sky. 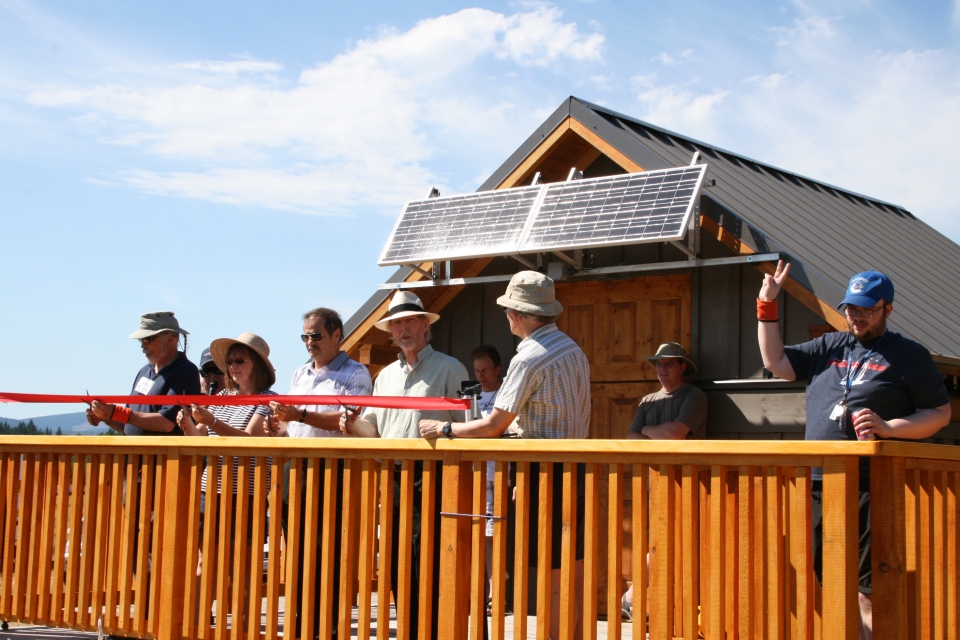 The ribbon is cut by our president, a representative from Swanson’s Ready Mix, and the two mayors on 27 June 2015.

Our SCC Observatory opened on the 27th of June last year. We’re planning a viewing session to celebrate the first anniversary of our first light on Saturday, July 2 (weather permitting). The observatory will open the gates at 9 PM (Sunset 9:12). BYO Telescope and refreshments.

UPDATE: 1 July 1800 hours- Wow. This morning before heading to Canada Day celebrations I checked the forecast for tomorrow and the sky charts and it looked good for an opening at the observatory for 2 July. When I came home in the afternoon and checked again I found that the forecast had dramatically changed: The forecast was now calling for rain in the evening on Saturday, 2 July and the ClearDarkSky chart showing overcast. What a difference a few hours can make! I will keep checking tomorrow and post another update closer to the event. If the forecast doesn’t change, it doesn’t look good for opening the observatory on the 2nd.

UPDATE 2 July 1000 hours:  The forecast has improved somewhat from yesterday. We’ll post later today around 1800 with another update on whether we’ll be opening tonight.

UPDATE 2 July 1800 hours: The forecast has gone back to predicting rain and as I write this the rain is bouncing off my skylights. ClearDarkSky is calling for overcast and Scott, our observer up near the airport confirms this. We will not be opening the observatory tonight.

Last night (4 June) 24 people of all ages attended our club’s “Last Call for Jupiter” Star Party for members at the SCC Observatory. It was a beautiful night, with just a trace of high cloud. There were 10 telescopes set up including the observatory’s 14 inch Celestron Edge HD. Later in the session our VP, Mike Bradley, hooked up his camera to the observatory’s telescope to capture images of the planets. 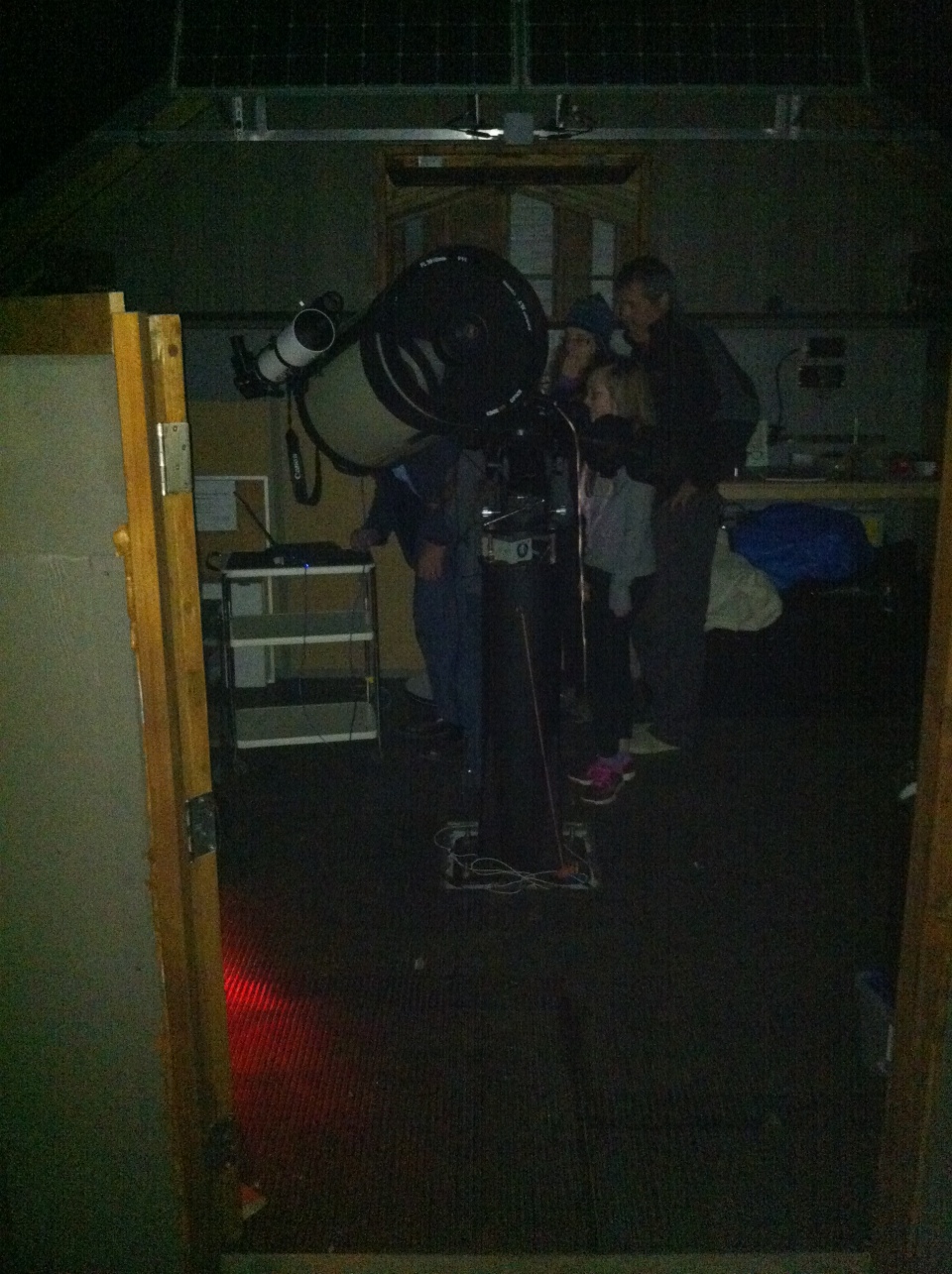 People of all ages watch Mike take photos of Saturn

Jupiter, Mars, and Saturn were all prominent in the sky, with Mars making a close approach to Earth and Saturn at opposition.

We look forward to seeing the results of the photography session. 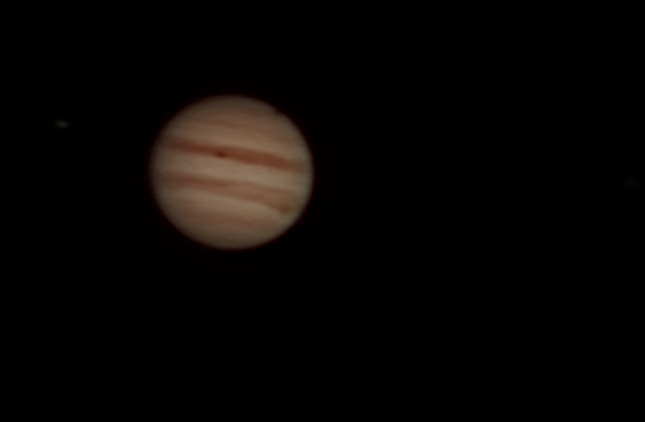 As the nights get shorter and the Earth spins along, Jupiter sinks toward the western horizon… soon to be engulfed in the murk and turbulence of the atmosphere close to the horizon, (which unfortunately is where saturn and mars currently lay :-()… having said that its been a great show on Jupiter this past few months and using my C11 SCT with bino viewers has given me some of the best views of the planet I have ever had…. but as they say all good things come to an end… until next year that is =D> .

Jupiter is still nice and high in the early evening so with a little luck and some good seeing we should get some good views on Saturday.

I will be there with bino viewers in hand…. there might even be a

See you Saturday… gate time to be announced… i should be there 9ish.

NOTE: Mars (on a close approach to Earth) and Saturn will be up there also.

This image of Messier 82 was imaged from Roberts Creek on May 29/30 2016 with a Megrez 120mm, Canon 60Da, and a x1.6 Barlow lens. Guided exposures were taken at 30, 120, 300 and 600 seconds for a total exposure time of 68 mins. at 1600 ISO. Stacking was with Deep Sky Stacker, processing in Photoshop CS2 and PixInsight. The sky quality (SQM) reading was an excellent 21.9, the best I’ve ever recorded from this location, all my neighbour’s lights were off and the moon had not risen!
Messier 82 is a starburst galaxy about 12 million light-years away in the constellation Ursa Major in which stars are forming at very high rates. It is a member of the M81 Group, this group is circumpolar, we can see it from our latitude all year round. Finding M82 is not particularly difficult as the “Plough” asterism of Ursa Major can be used as the starting point. The M81 / M82 pair is located 10 degrees northwest of Dubhe, the northwest corner star of the bowl of the Plough.
M82 is about five times more luminous than the whole Milky Way and has a center one hundred times more luminous than our galaxy’s center. The starburst activity is thought to have been triggered by interaction with neighbouring galaxy M81. As the closest starburst galaxy to our own, M82 is the prototypical example of this galaxy type, the Seyfert galaxies. In 2014, in studying M82, scientists discovered the brightest pulsar yet known, designated M82 X-2, it lies at the centre of the galaxy.