I made a simple projection telescope to prepare for the Eclipse (August 21st). All it took was a plank from an old IKEA shelving unit, a few scraps of wood and a couple of lenses. The objective is a 500mm focal length lens and the Barlow is a -25 mm one. I have a spare lens set if anyone wants it. 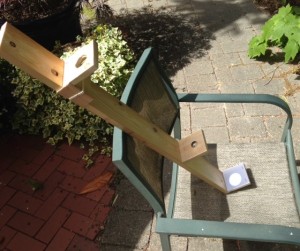 The entire device is just over 0.8m long and extremely easy to align.

The design is so simple that anyone could make one but I did find a nice article on line at http://richardsont.people.cofc.edu/safe_solar_folder/index.html. This article would be perfect to guide a budding young scientist in getting ready for viewing the eclipse or sunspots when they appear .